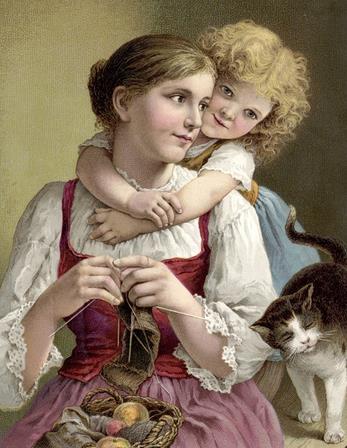 I have the privilege of being Mom to four wonderful daughters. As head of our little feminine sphere, I’ve had to initiate lots of mother/daughter chats of various sorts- biological, social, etc, and the cautionary type, especially of the opposite sex. The youngest has reached the age where some of these talks follow in rapid succession as her autonomy is increasing in various social situations.  I was feeling well seasoned in this area, she being the fourth, but as I pondered, I realized we needed an additional cautionary talk because of the moral confusion that abounds.

I introduced my new topic right before she left for an all girl’s camp. We reviewed about how traditionally boys and girls are separated for many activities at her age for the general protection of girl’s modesty and chastity. A religious environment of all girls and women leaders, aside from petty social drama, I had previously felt were safe places for her older sisters in regards to these, but not for her. I had to tell her she had to guard her modesty and chastity around girls and women as well.  I’ve heard one too many stories lately, where some young woman was totally blindsided by an aggressive, even abusive advance by another female. I didn’t tell her about any of the stories, and I discussed this in a manner that protected her conscience and modesty. Still, this was a sobering moment for me, but as a parent I’ve got to understand the times we live and adjust accordingly.  I have the feeling there will be many more new topics I’m going to have to add to our chats.

Mothers: The Next Generation’s Hope for the Future