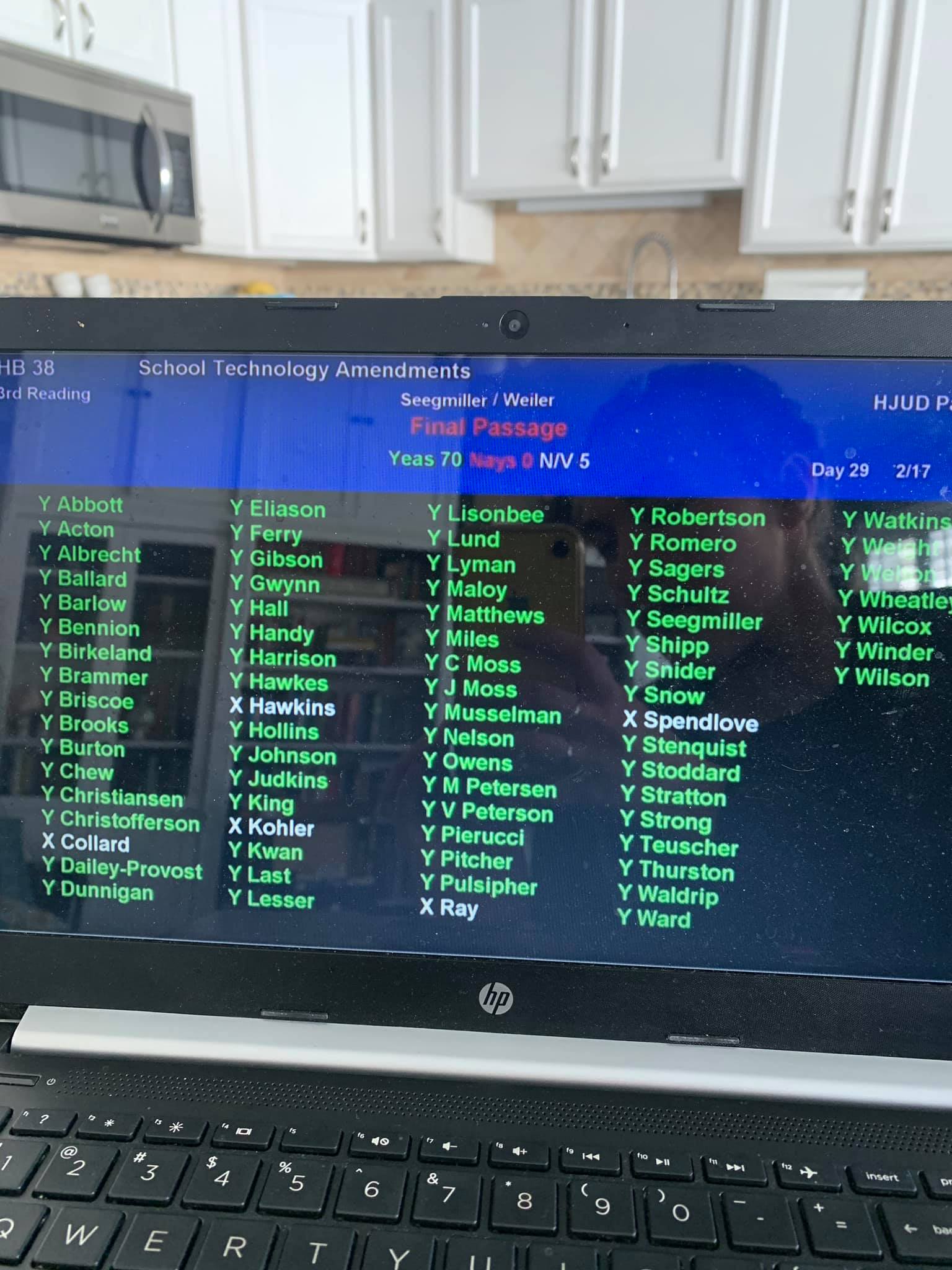 HB 38 School Technology Amendments, a bill by Seegmiller, met with overwhelming bi-partisan support from Utah legislators. During the bill process republicans and democrats alike spoke out in favor of holding the resource vendors accountable for hurting children. The bill was pre-approved during fall interim. In the main session, HB 38 unanimously passed the House and passed the Senate with only four “nay” votes. (democrat senators Riebe, Mayne, Kitchen, and Davis)

The bill requires the well-known, international, conglomerate, school digital resource providers like EBSCO, GALE, Cengage, Explora, Pro-Quest, Inspire, and others to be free from obscenities if provided to Utah school children. It also allows the state to back out of contracts with the database vendors if the vendors are found to not be in compliance with state obscenity laws. Additionally the bill requires the Utah Education and Telehealth Network [UETN] to provide proof of digital vendor compliance to the legislature each year.

As part of the Utah bill presentation school personnel and parents shared numerous stories about children seeing pornography for the first time in the school database and teachers not knowing how to stop the content from reaching the children. Because this issue hit so close to home, Utah lawmakers were inundated with complaints and pleas for them to take action and keep Utah’s children safe. The Utah PTA was also strongly supportive of the bill.

In the fall of 2018 Nicholeen Peck, president of WOW and a mother and of 4, found out from a friend that sex toys were being advertised to children in the school database called EBSCO. She couldn’t believe that would happen in Utah and started doing some searching herself. After typing very innocuous terms into the state EBSCO database collections and finding multiple images, videos, and articles promoting risky and illegal sexual behavior Peck contacted Senator Todd Weiler, known for his Utah resolution declaring pornography “a public health crisis.” Weiler verified Peck’s findings and said that action needed to be taken.

KUTV News did a story on the problem, and the EBSCO database was immediately disabled across the state. The UETN told EBSCO that they needed to clean up the database or they would get out of their contract. For a few weeks the EBSCO database was disabled for school children via school portals. Utah’s State Librarian, Colleen Eggett, spoke openly against disabling the  EBSCO database and said that it was up to the parents to keep their children safe from the harmful content.

Parents in multiple states have noticed that the library associations repeatedly defend EBSCO and GALE, big businesses, and don’t protect the children from explicit content. Why? Some reasons might be that the American Library Association [ALA] has its own code of ethics about viewing content. The ALA Library Bill of Rights says that people of any age should be able to see anything they want, and the ALA also sued the US government in 2001 because they didn’t want to comply with the Child Internet Protection Act [CIPA]. The ALA lost that law suit.

After a few weeks of EBSCO scrubbing and enabling their own filters, the Utah EBSCO databases were enabled again and pronounced “clean.” But Peck was not satisfied. She said, “I can see they have done some clean up, but still within 15 minutes I was able to find live links to Penthouse magazine, multiple graphic nude images, and an article about a 6th grader having sex with his drama teacher. They are not giving us what we are paying for.”

The database vendors market themselves as “the safe way to search.” No one questions these claims because anything that is put into a database has to be put there on purpose. Peck says, “It’s a kind of locked box on the web that a person has to have a login to access. This is why internet filters are not able to filter databases.”

After the EBSCO shut-down didn’t really solve the problem, and some of the previously removed explicit content started appearing in the GALE database as well, Peck, other concerned parents, and a group of legislators started taking other action to see if the problem could be solved without a bill. The state auditor and the state Attorney General’s office were shown the problem, and a legislative audit was requested. They were all shocked by the blatant exploitation of children, but none of them solved the problem.

At this point, Peck and the group of concerned legislators, including Seegmiller, knew that they had to run a bill just like Idaho did. Idaho’s 2020 bill caused EBSCO to create special databases for Idaho that are in compliance with their obscenity laws.

EBSCO and GALE are major suppliers of K-12 online research tools across the country/world. EBSCO alone sells its school products to over 55,000 schools nationwide, supplying millions of children with products that may contain pornography. Multiple other states are now following Idaho’s example and working on protective bills too.

In Colorado, where the dirty database problem was first uncovered, Robin Paterson, head of Pornography Is Not Education partnered with the Thomas More Law Society to bring a lawsuit against EBSCO and the Colorado Library Consortium. There have been good results of these Colorado efforts. Paterson reports, “EBSCO and certain GALE products were previously discontinued by several, large school districts in Colorado because of pornographic content.”

After years of research, Peck, Paterson, and countless other parents around the nation now know that EBSCO’s business model exploits children. EBSCO gets paid by magazines and other media sources and sites to have their content be part of the databases for children. Then states and school districts pay millions of dollars annually for their subscriptions to the databases. The EBSCO promotional materials promise content providers that their listings in the databases will “reach your target audience,” “increase web traffic,”  and “grow your subscriptions.” These claims sound like the content providers are advertising to children, not giving them school materials.

Schools and states unknowingly paying databases to dish up pornography to children. Media vendors pay to advertise to children through the databases. Children are being sold as the “target audience.” And, everyone seems convinced that this whole process is education. This is a good old fashioned scandal.

EBSCO has been named to the “Dirty Dozen List” by the National center on Sexual Exploitation.

The WOW database team as well as parents and clinicians all over the state of Utah worked really hard for this victory for Utah’s children. WOW calls upon other states and countries to protect their children from sexual exploitation through databases too by enacting bills that put the children first; not big tech companies like EBSCO and GALE.