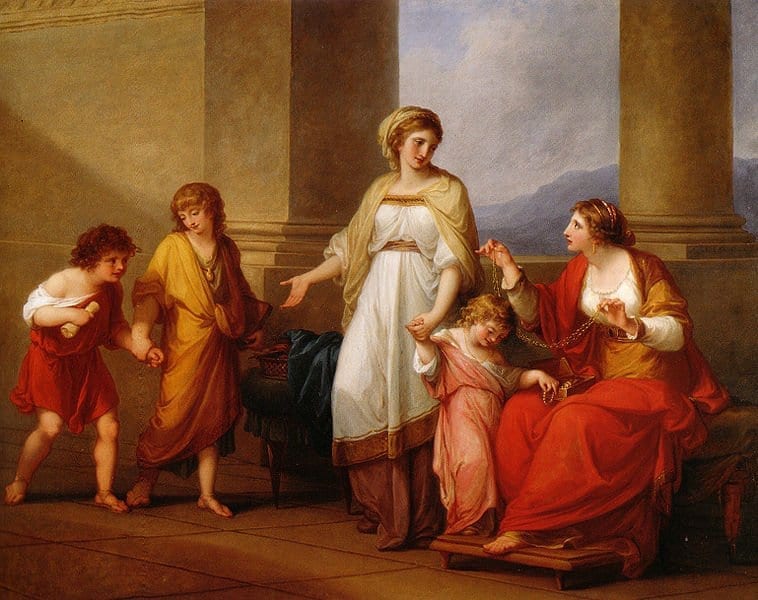 WOW upside down spells MOM. It’s a universally common title, but the real beauty and influence of motherhood begins to shine when Mom doesn’t accept the role as common. At a recent fundraising event, one couple at a shared table happened to be a Mom accompanied by her young son. Her husband couldn’t attend last minute, so his son was to take his place. As conversation progressed through the evening, it became obvious this beautiful woman did not accept her title as common. Motherhood was something she continually planned, prayed about, and sought wisdom in. It was something she put her best energies into. I knew I had found a kindred spirit when she said she was once asked what job she would choose if she could have any in the world. She said she thought about it a moment and then answered she already had it-being a stay at home Mom.

This reminded me of Cornelia Africana, an ancient Roman patrician whose maternal care and wisdom jolted Rome with the dignity and worth she brought to motherhood. One day sister patrician Compania showcased her jewels to Cornelia. After, she asked Cornelia to bring out her jewels for her to see. Cornelia in all sincerity gestured toward her young children and replied, “These are my jewels.”

It is true Cornelia was blessed with a life of material comfort, but she was hardly spared human suffering and grief. She was widowed fairly young, and though she bore twelve children, only three survived to adulthood. Later, even her two famous sons, “the Gracchi”, she outlived, because they were cut down in their prime of life for beliefs she raised them to stand for.

WOW respects and supports the dual role of parenthood, but today WOW wants to honour the Mother, and those who do not accept the title of Mom as common.

Where Have the Adults Gone? A True, But Unfortunate Story