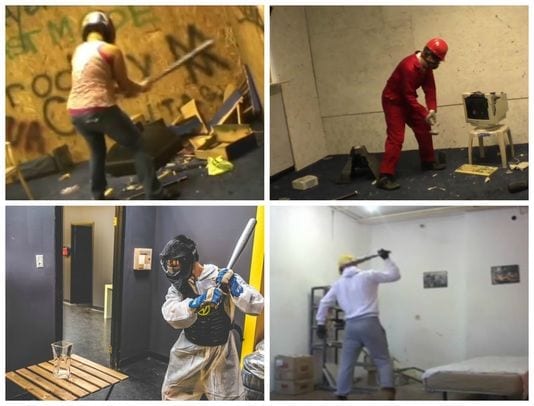 On a recent plane flight I happened to open the magazine provided for passengers by the airline in the seat back pocket. In the magazine there was an article titled “Break Room” about these “Anger Rooms” that are starting to pop up around the country.

For between $25 and $75 a person gets the opportunity to smash a fake office, living room or kitchen. The company can also provide mannequins to destroy as well.

Donna Alexander, the founder of Anger Rooms said the idea is to provide “a place for people to safely lash out without any consequences.”

After reading this line in the article my heart sank. “Are we really living in this place?” I wondered. Do we live in such a brutal, out of control society that it would be considered good therapy or appropriate for a person to spontaneously destroy stuff or mannequins posing as real people? Is the next great trend for the modern world anger and violence? Are we that selfish? Have we lost touch with our humanity?

These Anger Rooms are proof of our society’s entitlement mindset. The business is based on the idea that a person should be allowed to be as aggressive as they want to when they feel an emotion coming on, and not have to follow God’s law of cause and effect.

It is a false ideology that people need to “lash out” in order to calm down. Sure, when a person gets angry and aggressive they release endorphins which cause a high and then a low similar to  the high and low induced by exercise, but that kind of chemical manipulation isn’t calm.  It isn’t safe either.

It isn’t safe for a person to feel like they have to beat something or smash something to gain control of themselves again. What could happen to a person who routinely visits Anger Rooms to “lash out” and then one day is in a town without an Anger Room? What could they feel entitled to do?

According to the employees of Anger Room in Atlanta the solution to this potentially unsafe situation is clearly more shops. In one video on www.angerroom.com the staff member interviewed said, “If there were an Anger Room on every corner, the world would be a better place.” In the “Hemispheres” magazine the company said that they have intentions to take Anger Rooms global in 2017.

It saddens me that there is a market for paid anger sessions.

Don’t forget that it was the villain in the recent Star Wars movie who lost control, not the good guys. Kylo Ren, dressed in his black cape and mask, repeatedly lashed out in anger with his light saber on computers and in entire rooms aboard his ship. No one was there.  The property was his. He didn’t hurt anyone during those anger sessions. Despite all of this my son leaned over to me in the movie and said, “Mom, he is totally out of instructional control.” It was obvious that his evilness and out of control behaviors complimented each other.

As I look at the social and psychological steps we have taken in recent years to arrive at this new type of emotion-based Anger Room business, I see a society living a lie. The lie is that they see themselves as more humane and loving than ever before yet there are more bullying cases at school than ever before, more cyber bullying than ever before and more domestic violence and abuse cases than ever before. Is our society going more and more out of control? Are we living in a never ending violent video game? Does war have to be in our heads as well as on our televisions?

I am in my 40s. When I was a child most children still didn’t talk back to their parents. Now days I have seen children yell and hit their parents, even in front of other adults and in public places. In a recent Wall Street Journal article titled “Parenting in the Age of Awfulness” Leonard Sax said, “Children are immersed in a culture that stokes disrespect.”

What could be more disrespectful than a violent video game aimed at hurting another imaginary person for no apparent reason. And what about the way people talk to each other on social media and commentary threads on blogs? People are hostile and aggressive and this is seen as a sign of power. Text talking cuts out all civility in discourse.  And, finally the interactions seen in television and movies are selfish and image as well as power based.

On the internet we preach of personal power but never preach of self-restraint. Accepting no answers is not an option in most people’s minds. This is proven when young parents ignore authority as they let their children run wild in businesses and public places. We are missing boundaries and no answers. We need self-government.

This might go down in history as one of the most negative articles I have ever written, but I think it is important to take in the whole picture. Society at large doesn’t seem to be filling in the missing pieces.

We don’t need places to lose more control and ignore consequences. Instead we need the source of true control, and to focus on positive consequences. Without consequences there is no good and no happiness as well as no bad. Good choices create good consequences and a happy life. We need to put off the anger, not feed it, and show the world how to find the real power and the real happiness by learning self-government.

The history of this social change and reasons why we are now in this violence mess could all be discussed at length, but the solution is simple and short. Roles. If parents and children understood their roles again the world would be different. No answers would be given when needed and problem solving would occur with the help of consequences. When people understand their roles at home they remain more free from the intrusion of outside influences upon their roles. The media would become less important and be used less frequently. The role of media in our lives would be considered more carefully.

I have noticed that parents who know their roles and frequently teach and correct their children are also the parents who analyze the influences coming into the home more as well.

Knowing our roles and understanding them is only half he battle though. We must know how to properly use them. This means we need to know how to do the teaching with principle and skill. This is why I teach self-government.

“Parenting in the Age of Awfulness” https://www.wsj.com/articles/parenting-in-the-age-of-awfulness-1450397051

To Find Personal Success, Give Yourself a “No” Answer

EARN IT Act of 2020 Is Worth Supporting!