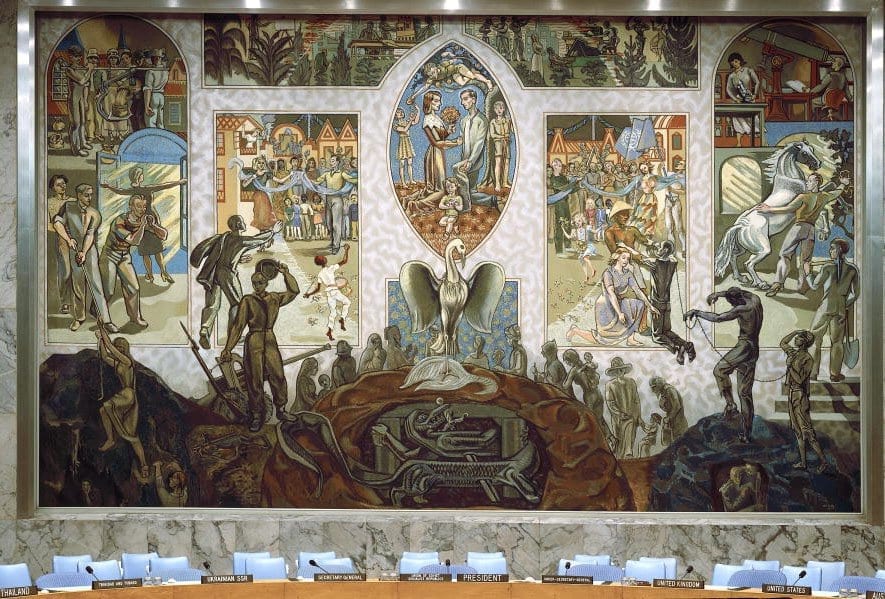 Mothers Standing For Family At The United Nations CSW 2015

In 1995 the United Nations had a monumental meeting in Bejing.  Part of this document created 20 years ago was this statement, “The family is the basic unit of society and as such should be strengthened…Women make a great contribution to the welfare of the family and to the development of society which is still not recognized or considered in its full importance. The social significance of maternity, motherhood and the role of parents in the family and in the upbringing of children should be acknowledged. The upbringing of children requires shared responsibilty of parents, women and men and society as a whole.”

This statement is in harmony with the mural that provides a backdrop for the Security Council Hall at the United Nations in New York.  Right in the center of the painting is an oval with a woman and a man getting married.  They have a child at their feet which seems to symbolize the marriage as the union that creates stable populations.

2014 was my first year visiting the CSW [Conference on the Status of Women] event at the United Nations.  After my first experience I was not sure the United Nations remembered how important the family was, but this year I have higher hopes. Don’t get me wrong I am not a fan of global micro-managing or anything like that, but I do think that unity on important issues can help strengthen societies and offer support.

For many activists who come to the United Nations the global platform is used to elevate the idividual as the most important unit of society.  The arguments for supporting the individual are not usually made with future generations in mind.  The real extreme activists want unlimited abortions, fewer children, more government intervention, forced equality (this never works as then the other party, men, become the oppressed), legal pornography and prostitution (pimping) which lead to child trafficking, and government mandated freedoms for personal preferences.

This year WOW along with many others promoted the language in the 1995 Beijing document.  We promoted the family as the basic unit of society and spoke about ways we could strengthen the family.

WOW hosted three parallel events this year at the CSW conference.  First we had and event called “The Power of Calm: Increasing The Influence Of Women” by me (Nicholeen Peck).  In this class we talked about how important calmness was and about how freeing it can be.  We also talked about how women promote calmness in all their environments but especially in the home.  And, when women create calm homes their children become free and powerful.

Our second event featured Jacky and Jose Aponte, parents of 12 children.  The Apontes talked about their story of poverty, abuse, and loss of identity.  Then they shared the solution to these problems; the family.  There were tears and laughs and everyone left with some ideas for how they can strengthen their families. The class was called “Family University”.

WOW’s third event was presented by the women of WOW Africa.  The class educated people about the problem facing women in parts of Africa, like Nigeria, when a spouse dies.  Women are not allowed to inherit property if their husband dies and are often left without basic necessities of life.  With no money or property and often times no education as well as the customary (socially manditory) one year of grieving the woman and her children are left in terrible hardship.  The women and men of WOW Africa talked about solutions to these problems facing African women and girls.

WOW feels the family, as the basic unit of society, promotes equality and identity because it provides a history and an identity for a growing child. When mothers and fathers fulfill their roles in the family children learn what their future roles in society can and should be for a sustainable future. Without strong families, societies decline and decay. Strengthening families needs to be the highest priority.

The family is the perfect development goal.

To see a very interesting and informative meeting that WOW participated in about making ‘The Family’ a new SDG go here.

Others Are Feeling The Call To Support The Family Too!

At events, in caucus meetings, and in conversations with people from all over the world I found people who are concerned about the family and want to strengthen it.  There were people speaking out about moral issues and in support of the role of men in our society too.  Sure, those promoting the family at the United Nations are still the minority.  But, the numbers are growing.  People are seeing that the truth about what is most important is just not getting enough press or support.  The most important and basic unit of all society is the family. We cannot forget.

To Get More Important Updates From WOW Sign Up For Our FREE Newsletter On Our Home Page!!!