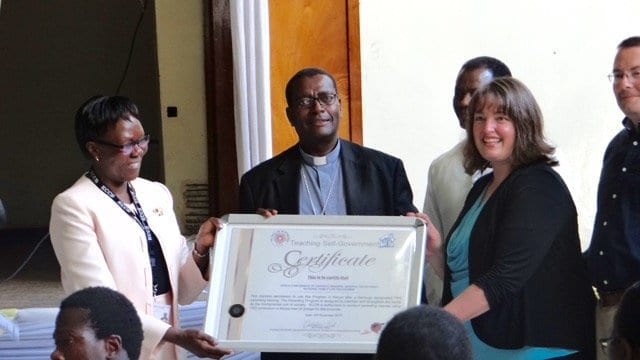 “You have blessed our lives and our families so much.”

“Thank you so much for coming to teach us!  You have to come back. Kenya is a big place. We need more teachings like this.”

“I have to admit that I never thought anything good ever comes from America. You have proven me wrong. This is good and I am going to teach it to everyone I can.”

“I have just started using self-government in my home and already my children have given up their cell phones and are disagreeing appropriately.”

“These self-government teachings are going to change Kenya in a good way. Now we just need to spread them.”

These are just a few of the expressions of gratitude I’ve received since our self-government teachings in Kenya began on Nov. 2, 2015.

After 21 days in Kenyan we’re finally back home to the colder Utah temperatures we’re used to.

Of the 21 days we were in Kenya, I spoke to groups about self-government 19 of those days. It was a packed trip. We didn’t waste a minute.

We were invited to visit Kenya by the KCCB [Kenya Conference Of Catholic Bishops] family life devision headed by Theresa Abuya. When we arrived we went to the KCCB office and had a special meeting with Bishop Mugambi, who is the bishop over family issues.

Before doing any official teaching, I wanted to meet with an actual Kenyan family to discuss family life and some of the issues they see affecting family life in their culture. My 13 year old daughter, Londyn, especially loved getting to know the children of the family — and the family chickens.

Immediately we started our first three-day training for the KCCB Key Team. They were really somewhat surprised to see that the trainers I brought were mostly children, and all from my family. I heard on many occasions, “Porter is an incredible trainer! He really knows what he’s doing and he has such confidence teaching groups of adults. I can’t believe this’s possible for a boy his age.”

One of the biggest moments of the training was when they saw Paije and I do an actual mentor session in front of them and discuss dating and social boundaries. One of the attendees mentioned that it isn’t customary for parents to get involved in the sexual and dating life of their children because it is considered private business. After seeing a real mentor session, they had a vision of the kind of openness they wanted to have with their children too.

The other big eye-opening moment occurred when the parents recognized that eye contact was important. In many Kenyan families the children don’t look at their parents, especially when being corrected. A story was shared of a girl who never really knew what her father’s face looked like because she didn’t look at it. After lots of talk and examples, the class observed that eye contact was one of the best ways to create a united family atmosphere.

We went on a one day safari and saw the wild animals of Kenya. It was a treasured memory!

When we went to church the first Sunday in Kenya, I was surprised by the bishopric of the LDS ward we attended when they asked me to not only speak for a moment in sacrament meeting, but to also give the lesson in the Relief Society hour for women. It was a wonderful honor to be asked. We fell in love with the Riruta Ward in Nairobi!

The second training began. It also took three days. This group expressed concern about the immoral and negative influences the schools are having because of comprehensive sexuality education that has been pushed upon them by the United Nations and the UN CRC policies that are taught to children, which make parents’ rights unimportant.

They showed gratitude for our teachings by baking us a cake and presenting us with some gifts. They gave our family a wood carving of us as a Massai family. One Massai gentleman there gave me a Massai name as well. He named me Nashipae [na-she-pie], which means joyful one. I was very touched by that.

We fed giraffes at the Giraffe Center.  I even kissed a giraffe.

We played with baby elephants at the Elephant Orphanage. The baby elephants end up there when their parents die in the wild and the elephant doesn’t have anyone to care for it. It was so fun to have them rub up against us and lay at our feet to be rubbed and played with.

I spoke to students and professors at Tangaza University in a special presentation.

We also spoke to a large group of professors, community leaders and students at Strathmore University for the kick-off event of their new Institute for The Family program at the university. I was asked many questions by this group and others, but one question kept coming up again and again, “What about corporal punishment?” Many adults mentioned that they were raised being hit and that they turned out okay. Hitting children is a very common practice in Kenyan homes.

I explained to them that hitting children is usually a sign of being reactive and not being proactive (planned ahead), and it doesn’t really teach correct behavior. I also mentioned that if something is simply done to a child, the child doesn’t get the opportunity to actually accept the consequence they earned.

We were invited to speak at a Catholic Small Community meeting and were honored with food and a party. One child came up to me and told me the steps to following instructions that her mother had taught her since she came to the first training we did.

We trained our final and largest group of trainers. In the three trainings we conducted, we had trained a total of about 85 people to be TSG trainers in Kenya. This last group of trainers had people of multiple Christian faiths in it, which made me really happy because then the Teaching Self-Government message for families will reach even further throughout Kenya.

We spoke to the KCPF [Kenya Christian Professionals Form] about the damaging effects of comprehensive sexual education on the consciences of the children and the family and about teaching children self-government. I explained what had happened to sexual education in the U.S. and the U.K., which was really helpful since they’re trying to stop the movement to put the program in schools right now. The enthusiasm of the leaders was great. They didn’t want the meeting to end.

We spoke to a group of youth ages 8-18 about family relationships, communication styles and the four basic self-government skills. It was fun to get an insight into how the youth in Kenya think and relate to each other.

On Nov. 20 the KCCB held the official launch of the Teaching Self-Government skills being taught around their country now by trained people. The heads of the Catholic Family Life program were there, as well as other enthusiastic people. The bishop attending admonished the people to learn the program well because he said, “She has obviously been called to teach this.” He was encouraged for his country and the families in his church when he heard the TSG teachings.

We visited one of the slums in Nairobi.  There are multiple areas like this. The families struggle to keep food on the table and to meet their basic needs.

We got to meet with a family and go inside their home made of mud walls and a tin roof. They were so hospitable and kind.

The children in the slums were a special delight! They were so happy and loving!

There were other groups I spoke with and things we saw, but time doesn’t allow for more. The teaching trip was a huge success!  The teaching will not stop with my one visit. The people are now mobilizing and teaching each other the principles they have been taught, using the materials we provided for them to teach with.

The United Nations has been attacking the families of Africa for some time now in an attempt to weaken the families by diminishing the necessity of the parents. I’m optimistic that this one three-week trip has the power to empower the parents to take back their roles in the home and lives of the children so that the children are better insulated morally from the confusing messages they hear at school and on the media. It is about time that a country see what is coming before it fully hits. Kenya has a chance to stop some of the attack on the family, and self-government is going to be one of their defenses.

Thank you to everyone who donated to the teaching trip! We couldn’t have done it without you! Every time we spoke anywhere the organizers told the people that me and all my friends made the teaching possible and they always expressed words of gratitude during and after presentations. Their hearts were full of love and thanks as we left.

One of the TSG trainers we brought with us to Kenya, Misty Thompson, is going to move her whole family to Kenya this spring to be a person on the ground there to help the teaching go forth. We are so grateful for their desire to be part of this great project. She is a member of WOW and is the Kenya Specialist for the WOW organization.

Our family is grateful for the opportunity we had to serve God by helping the people in Kenya strengthen their families so that the immoral voices of the world can be less effective at attacking them. We are also grateful for the work of the organizers, Theresa Abuya and Martin Opondo, and for the sleepless nights they put in to make it all work. And, we are thankful for the divine institution of family and the strength it has to change societies and nations if it has a strong family culture. My one family changed the hearts of multiple families, who will now change the hearts of a nation. What a miracle!

Utah’s Getting It Right: The Comprehensive TRUTH about Sexuality Education

TEACH YOUR CHILD TO LEARN BY PRINCIPLE NOT PRINCIPAL