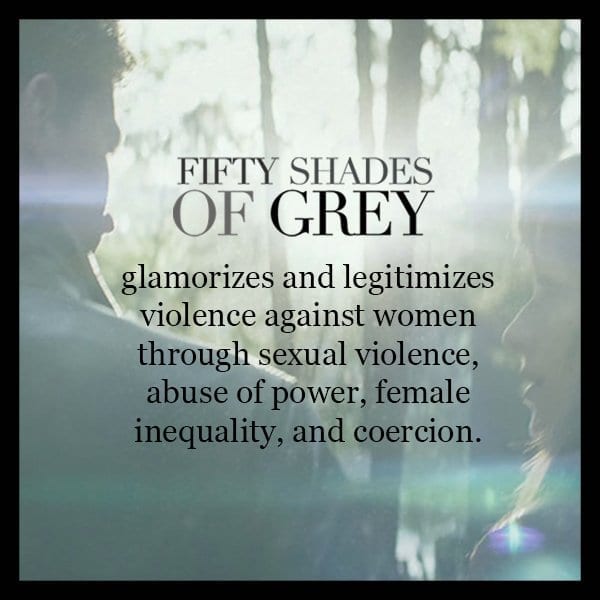 The pornification of our culture just got worse with the new movie Fifty Shades of Grey.  Just like Planned Parenthood, 50 Shades endorses torturing women for sadistic sex practices.  #50shadesisabuse .

Don’t let your family or friends see the new movie Fifty Shades of Grey!  The movie, that is being marketed as a rated R love story with some “unusual behavior and graphic nudity” is way worse than it sounds. It opens on Valentine’s Day 2015.

Rated R movies are not the kind this author goes to see, but if I didn’t know the rating and saw the term “unusual behavior” I would assume some of the characters were portrayed as awkward or some how out of control.  I would not even dream that the term is actually referring to being exposed to abuse of a naive woman by trapping her in a torture sex world.

Relationships around the world are already perverted and damaged by the pornification of our culture.  To add the element of torture sex will only degenerate the moral culture of society more and more.  The fact that the parent book of this movie was read enough to make a movie should be very concerning to all families.  In this movie the consciences of all people are under attack by every perversion imaginable.

Furthermore, as a global women’s organization we are appalled at the objectification of women this story promotes.  The story glorifies and glamorizes disturbing acts that turn women into objects of torture and nothing more than sadistic toys for sexual perversions.

Warn your friends! Get the message out on social media.  #50shadesisabuse

For more information on the disturbing nature of this book series and film read here!

To Find Personal Success, Give Yourself a “No” Answer