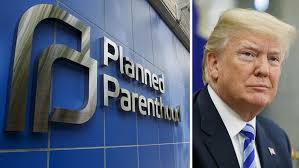 From the beginning of his presidency, US President, Donald Trump, has been clear about his opposition to Planned Parenthood taking federal dollars to increase the number babies being killed by abortion. This week he announced that the government is going to be checking up on Planned Parenthood and others by enforcing the rule that health clinics who receive US title X funding for health care, cannot promote or encourage abortions.

We are mid way through a year fraught with abortion debates starting with some states declaring infanticide legal and other states combating these extreme full term and post birth abortion laws with more restrictive abortion laws which decrease the legal weeks allowed for abortion and disallow discrimination based abortion of Down’s Syndrome children solely because they are diagnosed Down’s Syndrome.

Now Planned Parenthood has answered back by declaring they will no longer take any title X funding provided by the US government for their clinics around the country. This is great news for our future society. Planned Parenthood has used government money as they have coerced low income and minority women to terminate their babies for far too long.

“It is unethical and dangerous to require health care providers to withhold important information from patients,” Ayers’ statement said. “During this period of limbo while we wait for the court to rule, our affiliates are not using federal Title X funds to provide care. We are continuing to fight this illegal rule in court and to provide care to all people — no matter what.”

Planned Parenthood says it will be using some of it’s own savings to continue to offer abortion services to women. Women still pay to have abortion procedures at the Planned Parenthood clinics, so it doesn’t seem that Planned Parenthood will lose too much of its savings. NPR reported that, “Officials say about 40% of Title X recipients nationwide receive health services at the group’s clinics.”

This very well may be the second most memorable abortion year on record in the United States, second only to 1973 when the historic Roe V Wade decision was made. It is a very good thing that the momentum in the abortion and life debate is swinging toward respecting lives, no matter their socio-economic class. The United States, and other countries, need to stop discriminating against low income and ethnic minorities around the world by funding the killing of their babies. It is time to return to common sense and overturn Roe V Wade.